A visit from Frederiksberg Gymnasium 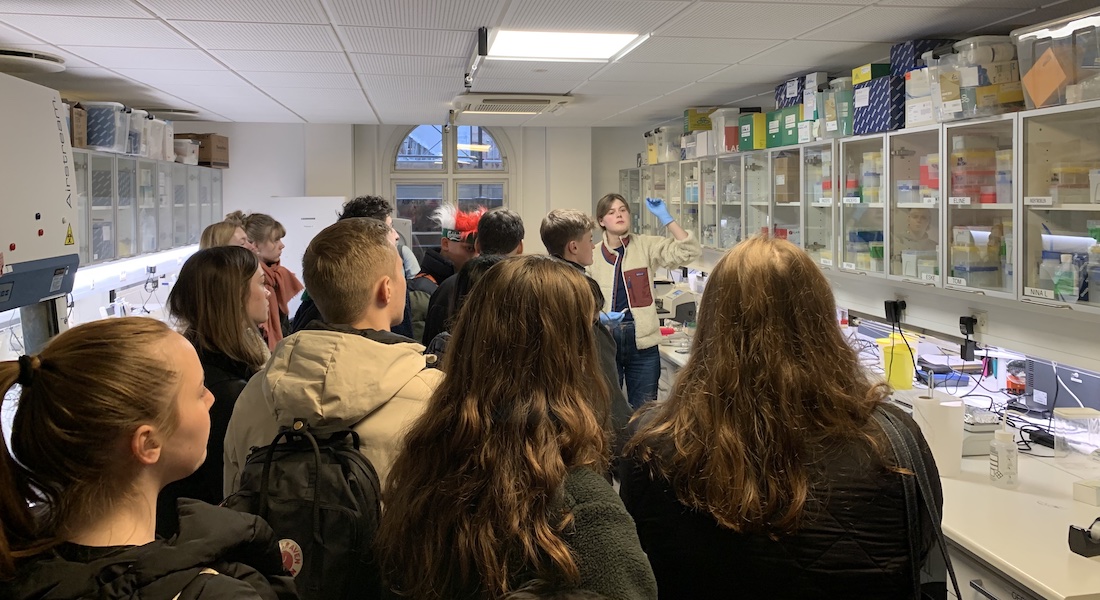 Though the field of Hologenomics is becoming increasingly recognized within the scientific world, it is still rather novel and incomprehensible to the rest of the world. A lot of people know that microorganisms such as bacteria influence their health but lack an understanding of the mutualistic symbiosis between the microbiome and its host. And since the field is as new as it is, there are still a lot of challenges beset by communicating the field of hologenomics to people outside of the scientific community. This, however, is excitingly starting to change.

On Wednesday the 30th of November, a third-year class (3.Z) from Frederiksberg Gymnasium with biotechnology as their study programme, visited the Center for Evolutionary Hologenomics (CEH). The visit was a part of a project week about Hologenomics – one of the first, if not the first, of its kind. The day consisted of 2 lectures from PhD fellow Caroline Winther-Have and Associate Professor Morten Limborg, a Q&A about everyday life at the university, and a tour around the laboratories. Caroline had also made an assignment about the subject for the students to do as preparation for the visit.

When asking Caroline how it was teaching high school students about Hologenomics, she said: “It is really interesting, as you have to keep it very conceptual whilst providing enough background information to make it comprehensible, without boring the students or overexplaining certain subjects.” She also said that she was surprised by how challenging the students found the assignment, as she had feared it might be both boring and basic, underlining the possible complications of communicating one’s own research to people who do not know much about the field.

Caroline continued by saying, “Overall, I think high school students are a lot of fun to teach about Hologenomics, as their questions can be unexpected in a great way, and it is a good challenge to simplify your research in an engaging way. On a practical note, next time I will spend less time talking and instead focus more on engaging the students in the discussion, both for them to feel included but also to make sure the different points get across, as the students were very curious about the subject.” In this sense, the teaching of the research to high school students can be seen as a way of improving the overall understanding and communication of the field.

In Caroline’s experience the subject was well received among the students, as they seemed to find “the complexity of Hologenomics and the extent to which it might be involved in health and evolution” to be striking. She also emphasised how it might be “exciting for the students that we are only in the beginning of understanding many of these mechanisms.”

This was confirmed by many of the students on their written evaluation of the visit to CEH. The students wrote how it was interesting to learn about and work on a new research field instead of a subject that has been researched for many years. One student stressed that it was nice to learn about a subject that they had never heard of before, and another was taken by the way Hologenomics was an entirely new way to consider biological questions and how it makes innovation possible. The students also complimented Caroline, saying how nice it was to feel her genuine interest and passion during her lecture.

The biotechnology teacher, Jens Vilsom Andersen, from Frederiksberg Gymnasium also felt that he got a lot out of having a project week centred around Hologenomics. He said that from the perspective of a teacher, it was a bit like supplementary training in the field of biology, “both regarding the fundamental idea of Hologenomics, but also in the sense of learning about the new techniques and instruments, which is used in the work.” Jens also complimented Caroline and Morten on the lectures and the work that they had put into the visit.

To finish, Caroline was asked about the future implications of having a high school class visit CEH, as well as being taught about Hologenomics. “I think it is a really important step to introduce it to a wider group of people, as Hologenomics in many aspects is a different way of approaching and thinking about biological questions. Being introduced to it early, such as high school level, gives an advantage regarding appreciating the complexity of this holistic way of looking at the biological processes of evolution and disease,” she said. Therefore, it is exciting having taken this step forward in the evolution of the field of Hologenomics, together with the students and teacher from Frederiksberg Gymnasium. We are looking forward to seeing what will come out of it in the future.