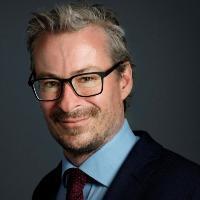 Eske Willerslev holds a Lundbeck Foundation Professorship at University of Copenhagen and is the director for Centre of Excellence in GeoGenetics. He also holds the Prince Philip Chair in Ecology and Evolution at the University of Cambridge, UK. Additionally, Willerslev is a research associate the Wellcome Trust Sanger Institute. Willerslev is an evolutionary geneticist. He is particularly known for sequencing the first ancient human genome and establishing the field of environmental DNA, where modern and ancient DNA from higher plants and animals are obtained directly from environmental samples. Willerslev was born in Denmark in 1971. After spending his youth as explorer and fur trapper in Siberia, he established the first ancient DNA laboratory in Denmark and obtained his DSc at University of Copenhagen in 2004. At the age of 33, Willerslev became Full Professor at University of Copenhagen - the youngest in Denmark at the time. Willerslev has been visiting researcher at the MD Anderson Cancer Research Centre in Austin, Texas, independent Welcome Trust Fellow at Oxford, have been Visiting Professor at Oxford University, and a Miller Visiting Professor at UC Berkeley. Willerslev is a foreign associate of the National Academy of Sciences (US), member of the Royal Danish Academy of Sciences and Letters, horary doctor at University of Oslo Norway, and University of Tartu, Estonia and holds the Order of the Dannebrog (issued by her Majesty Queen Margrethe II of Denmark).

Willerslev has broad research interest in the fields of ecology and evolution. He started out as an environmental microbiologist, then moved into the field of invertebrate systematics, and later into mammalian population genetics and community ecology. Over the past seven years Willerslev has focused major parts of his research in understanding processes forming contemporary human genetic diversity, distribution, and disease load. In his research, Willerslev is known for his multidisciplinary approach collaborating with researchers from many different fields such as archaeology, anthropology, palaeontology, chemistry, physics, statistics, and mathematics, but also philosophy. However, his primary experimental approach is ancient DNA: He was the first to establish the field of Ice Core Genetics (PNAS 1999), the field of ancient and modern Environmental DNA (Science 2003), and Ancient Human Genomics (Nature 2010), large-scale past population genetics/genomics (Nature 2011; Science 2014; Nature 2015), and large-scale past disease population genomics (Cell 2015).He has more than 200-peer-reviewed papers (first publication 1999), of which 50 are in the journals Nature and Science (3 in press, 31 as first or last author). He has supervised more than 60 students and post docs. He has communicated his scientific work to the public through multiple films, popular books. Among his scientific achievements are: